Life challenges death, the Taurus, Scorpio eclipse axes, Saros 116- 6 north, what we have and what we desire. The flower blossom and the flower wilt, metaphorical, but fixed and ridged find it hard to modify!

Time is fighting hard drawn upward as gravity pushes down, no life can stand in certainty, except it continue in its centre, out of which it came!

Posted by Beyond The Cosmos at 1:43 PM No comments: 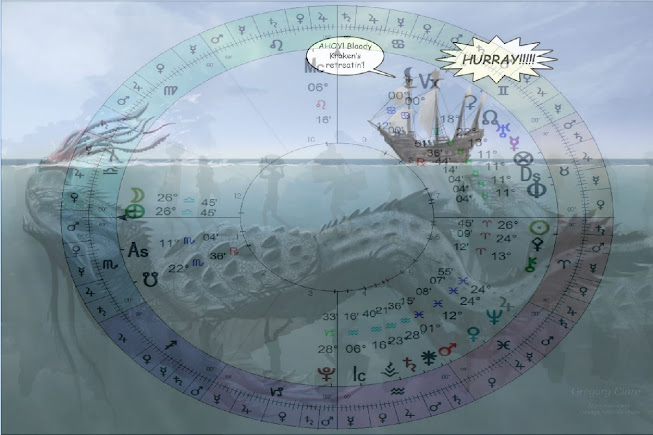 This Pisces stellium pushed along by Mars could be described as a Paddle wheel ‘Water train’ sympathetic empathy driven, highly emotionally charged; however with the Ripe Moon in Libra (Air) articulating Venus lofty desires.

Mercury in Taurus on the western pivot (Descendant) co-joined to Uranus and applying sextile to Venus. Mercury is of special significance as She/ Luna Sect is ‘Arising’ 15 degrees separation from the Sun and (climbing (epitole) on the pivot in a ‘crooked’ and false ascensional sign co-joined to Uranus and Ouranos is conjunct Alpha Ceti, ‘The Sea Monster’. She/he Hermes is returning to the night skies and this astronomical arising is given the title ‘phausis’. This condition is strengthened by Mercury occupying the western angle.

There are two ways this can infiltrate the unconscious, one is by a revolutionary influence of spirit thinking and the other is failure through misdirect scattering of one’s actions, hurrying and nervousness. The outcomes are derived from a conscious awareness of one’s position. The full moon is located in the 12th mundane tropical place which is suggesting refugees’ fleeing foreign regions as the transiting Moon is lord of the 9th place.

And finally the exalted 26 degree Aries Sun is applying square to Capricorn Pluto, suggest a strong and willful leader determine to exercise their power. All planetary bodies are still direct in motion emphasising the need to move now!

Posted by Beyond The Cosmos at 11:06 AM No comments: 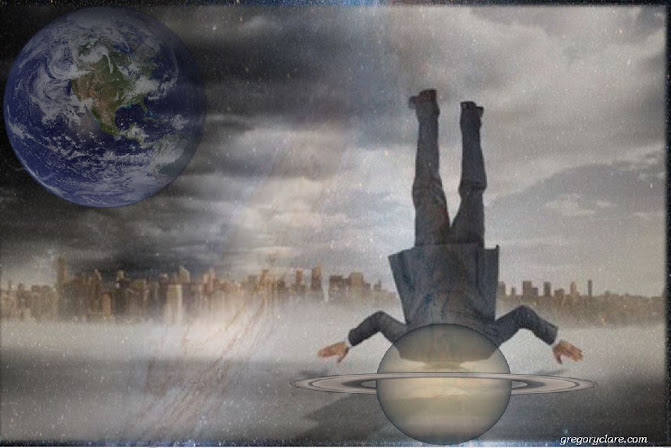 "We humans are social beings. We come into the world as the result of others' actions. We survive here in dependence on others.
Dalai Lama"
Well we arrived at the crossroad and did you notice?
Saturn as an archetype suggest that if we don’t ‘Stop’ and think deeply about our action; Ignorance is failure to notice, leading to isolation.
“When we fail to notice that a decision has an ethical component, we are able to behave unethically while maintaining a positive self-image.”
Venus ingresses into Pisces and as such speaks of ‘Exaltation’,
Correctness & Rectitude in Speaking and thinking!
All rights reserved
Gregory Clare
Posted by Beyond The Cosmos at 11:32 AM No comments: 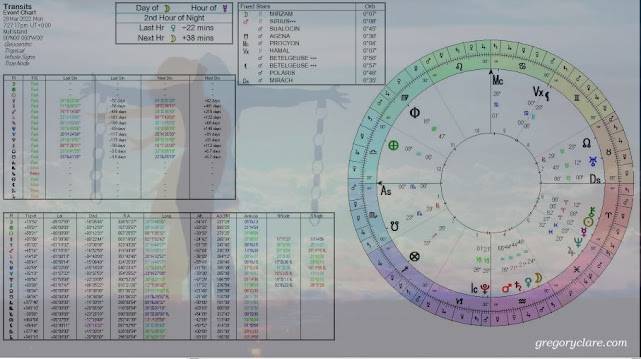 March 28th 2022, Venus flees for freedom! Breaking her besiegement, Venus has reached not only her escape from ‘Enclosure’ but also her furthest elongation east of the Sun.
Venus is now moving with speed as she begins to descend in altitude as a ‘Morning star’.
Mars approaches Saturn; this is an inauspicious meeting of the trouble makers at 22 degrees Aquarius, squaring the Moons Nodes. This April 5th meeting is as I’ve mentioned (earlier posts) the ‘Crossroads’ and many choices lay ahead which will determine the future direction for many of us. The Head of the English Monarch (QE11) is at the forefront of this transiting moment.
All rights reserved
Gregory Clare
Posted by Beyond The Cosmos at 8:41 AM No comments: 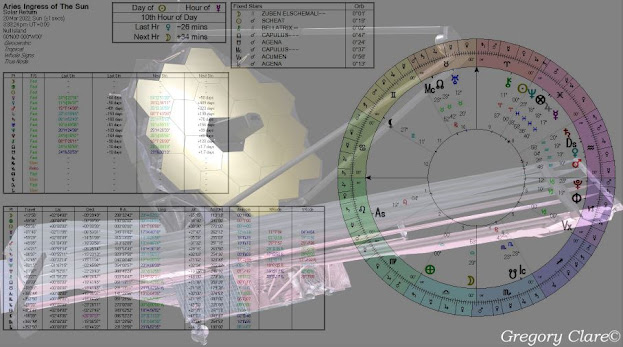 Mundane global chart for the Aries Solar ingress 2022: 19 degrees Leo rising ‘Confines’ (terms) of Mercury (contestation) the Lord is the exalted Aries Sun found in the 9th place, the Joy of the Sun. This is suggesting Foreign Affairs and our beliefs whatever they may be will feature strongly and each of us will feel we stand exalted in those feeling.

The MC/North Node (Rahu) 23 degrees Taurus, IC/ South Node (Ketu) 23 degrees Scorpio is a challenge for the globe. 23 the degrees Taurus is co-joined to the Star Capulus or rightly put the star cluster NGC1039, this star cluster is the Hand and sword of Perseus and with Rahu occupying the space this is a Mass calling to the World. The nature of this co-joining 10th place and MC angularity suggests a nature of Mercury/Mars; Loss of reputation and disreputable behaviour, lying and improprieties in voice and thought, accusations and lawsuits. On the flip side the IC/South Node, Ketu is conjoined to the star Hadar or Agena the Arabic name suggesting ‘Ground’. This aspect on the underground stake of the chart is pointing to self-analysis and a calling for self control of our internal mind, reflective of the past material gains and the worth of those?

Saturn on the western pivot is strong; this Saturn is starring towards the abyss! Saturn as an archetype reminds us of ‘Time’ and how if we ignore –ignorance, a failure to notice we may keep repeating actions with a consciousness. This suggest another key phase for Saturn ‘isolation’, Mercury is conjoining Jupiter in the 8th place suggesting resource of others will be the voice projected, however not heard through the muffled waters of the ‘Fish’ Pisces, also the 8th place is the place of the idle. Additionally Chiron who is in the outer most limits of its orbit is crying out through Mercury, Chiron is conjunct the ‘Messengers’ North Node, voices from beyond need noticing!

Posted by Beyond The Cosmos at 3:00 PM No comments: 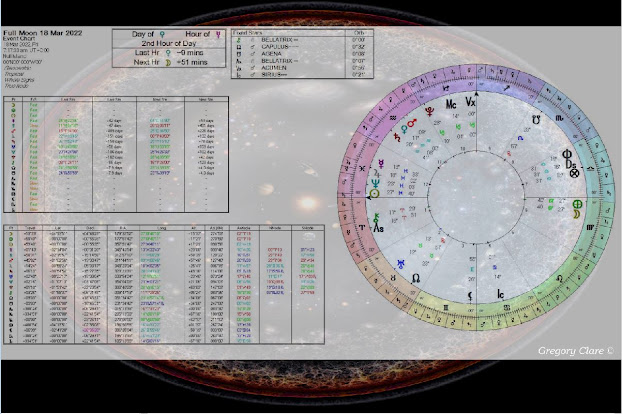 Ripening, Virgo 27 degree Full Moon in the ‘Confines’ (terms) of Mars. Valens does not portray this as a happy region for the Moon to occupy when glowing; night prowlers, hired men, counterfeiters, imposters. He goes on to suggest captured and treated inhumanly.

The upside here is the IC of the world chart has the brightest Star of the heavens Sirius shinning the pathway to the underworld.  Egyptians knew this ‘Dog Star’ Sothis as the ‘jackal’ the skilful hunter. The embodiment of Osiris, God of the Dark, all stars carry a spiritual ‘Fate ‘and reward the moral ethics and none more than the ‘Scorcher’.

The Chinese named the star the ‘Wolf’ protector of the night. Thoth-Sirius will shine the light on the doers of harm and they can’t hide as the light follows them endlessly giving them no rest, especially when co-joined to the IC.

This current Mundane Lunation falls across the places of Bad Spirit and Bad Fortune, 12th and 6th houses, additionally Saturn culminates over the Russian capital, Moscow.

Posted by Beyond The Cosmos at 9:53 AM No comments: 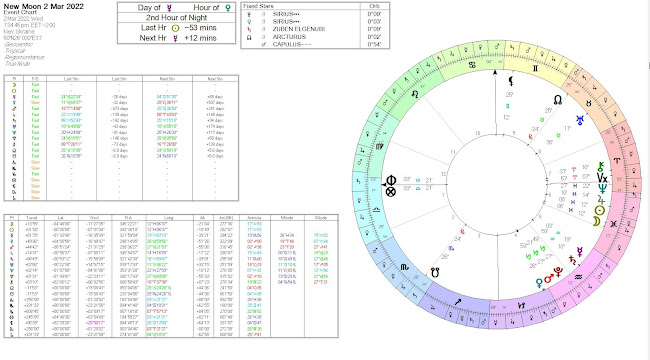 Both Lords Venus and Mars are co-present and conjunct in the 4th House- the Homeland, signifying at battle for the homeland. Mars L7 Lord is exalted and occupying his exaltation degree partile co-joined to Pluto. This is suggestive of the ‘Power’ Mars is wielding, the enemy.

Venus L1 is trying hard and has two favorable assets as she is parallel co-joined to the brightest Star in the heavens Sirius, Mercury is also parallel with Sirius. Ancient authors’ suggest the power to find your way in ‘Darkness’, God of the Dead. This was seen as a challenge to fight your way through the ‘Demons of the underworld’.

This is a fairly equal distribution of strength on both sides, except for the Mars/ Pluto Power, as Mars occupies his Confine as well. Venus is in the Confines of Mars. Again showing the strength and hold or wielding power of Mars. However as ‘Time’ moves forward Venus is slowly moving quicker than Mars, not by much but is increasing in motion and is ‘Above’ high in her latitude opposed to Mars who is ‘Below’.

These two over the lunation cycle exchange places, on March 6th, 2022 @ 10:32:59am astronomy Time or Swiss ephemeris Time 09:12:45hrs Local, which places both on the Midheaven. Venus will partile co-join Mars at 00:01 (300°4.752' longitude) Aquarius! At this moment Venus will then enter into Enclosure (besiegement) caught between Mars and Saturn until March 28th when she partile conjuncts Saturn and then frees herself of Malefic enclosure.

When Venus co-joins Mars both will not only reactivate the Mars/Saturn conjunction of April 2020, but also the Great conjunction of Jupiter/Saturn Dec 2020. Additionally the Confine Lord is the Mercury; Triplicity Lord of Air is Mercury - negotiator (Contestation).

Triplicity Lords for Venus and Mars in the New Moon chart; Night (Lunar) Earth, Moon, Venus and Mars. The Moon/Sun and Jupiter are in the 6th place of Bad Fortune/loss and suffering, house of the Arm Forces. 12 degrees 06 Pisces is the Confines of Jupiter. Lord of Midheaven is the Moon; Jupiter is the Dispositor and Lord of the 6th. Making use of Regiomontanus Houses, Jupiter also has governorship of the Sagittarius ‘Intercepted’ 3rd house. The Nodal axis falls across the 3-9houses. The 9th house Rahu- north Node and cusp falls upon the Stars Capulus and Algol, extremely difficult “Portals of Light’. Algol and Capulus represent the ‘Hero quest’ another battle within the underworld of Light and Darkness –Fear. Emotional charged with the sense of ‘Not losing your Head’ whilst undergoing the ‘Quest’.

Allies lay in the 11th and 11th from the 7th for the enemy, which is the 5th. The 9th from the 10th is the 6th and is where the 11th Lord Sun is placed in Pisces co-joining ‘Combust Jupiter’. The 5th House for the enemy is Aquarius with the Lord Saturn with Mercury in Air, showing the strength of the emery with regards to the Air. On March 5th the Sun will conjunct Jupiter commencing a new ‘Synodic’ cycle. The chart for that day and time shows 28 degrees Leo rising, Jupiter and Sun are within the enemies’ house the 7th; however they are in a different sign to the descendant with the L7 in the 6th house or 12th of the 7th.

On March 8th the exalted Taurus Moon will co-join Rahu with strong adherence on the Ecliptic, the Day of Mars and the Hour of the Moon, (10:20am) Moon parallel conjunct Arcturus in the 12th house and Saturn conjunct the MC.

The following day March 9th at 6:18pm the first quarter Gemini 10 degrees Moon will move ‘Outer Bounds’. Two things about this degree of the Moon are troubling 9 degrees Gemini is the Nuclear degree (a new moon exactly on this degree is coming on May 30th 2022! More about later) and the transiting 1st quarter Moon commences a curtailed passage of outer bounds. Additionally the curtailed Moon will traverse over Uranus’s Geo-centric N. Node 11 Gemini. The Moon will re-enter earth’s plane on March 14th around 09:09am local time and is at 6 degrees Leo directly opposed to Venus and Mars. And the Sun will have just moved on from a conjunction with Neptune.

Finally the Ripe-Full Moon is on March 18th at 9:17hrs local time, more on this in coming week.

Posted by Beyond The Cosmos at 6:29 PM No comments: